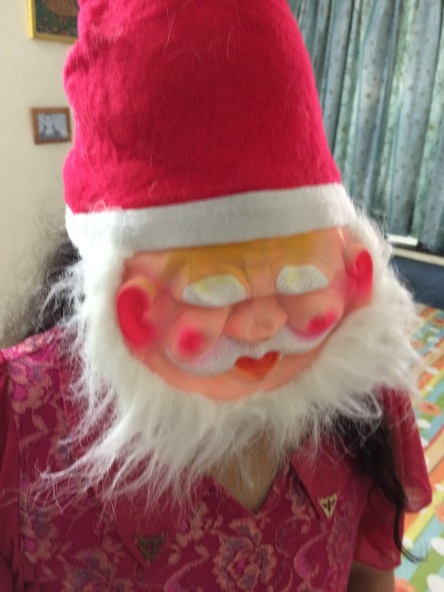 It was a normal day to start with just that the previous night, I had promised Kavya that I would be back by 1030 from cycling. She had taken my phone which at that time I felt was to play Lumosity (That is the only game permitted on my phone). I had expected it to be a cakewalk as was going to do about 40 kms. Woke up early and was out by 0600 and cycled to Lucky Biryani in Bandra along with Nitin. BCCT let by Vishal Sharma had planned the Christmas ride to an orphanage, Swagat Ashram near Malad. We were under the impression that the ride would start at 0630 sharp but we left only by 0650. Made it to the Ashram by 0820 or so. Waited as the food packets hadn’t arrived. Finally at 0905 left as I knew I had to reach home. Dropped by to meet my Mami in Kandivili who was surprised to see me and shocked that I was on a bicycle. When I was there Kavya called and reminded me of my promise so I confirmed that yes I was on track even if I knew that it would be impossible to reach home from Kandivili in 30 minutes.

When I was at Jogeshwari, I took a hydration break when I heard the phone ringing. I picked up only to hear a bawling Kavya. I checked my watch and it was 1040 already. Asked her to calm down and tell me what the matter was. She simply said “You broke your promise! Not fair!” I tried to argue with her but she would take none of my stories. Checked the phone and had clocked just under 50 kms so decided to go on for a few more minutes to get over the 50 km mark and then take a cab. Around the Domestic Airport, after completing just under 54 kms, I boarded a cab with my cycle on the carrier. As we were moving, I called her up to inform her that I was on my way home. I could not fathom what the din honestly was all about. Once home, she snatched my phone and ran into the room and locked herself in. Finally she opened after 10 minutes and asked my parents and us to get in with eyes closed which we obeyed.

As we entered, she asked to open our eyes and we saw her with a Santa mask put on. She asked her to look for the gifts that she had got for us. And while we moved she played “We wish you a Merry Christmas and a Happy New Year” recorded in her own voice on the phone. She bought chocolates for my Dad, Pauravi and me. And a Sudoku book for her favourite, Dadi (my Mom). She then danced with each of us while playing the song in the background. It was so touching. And she said “No one ever gets you all gifts so I decided to get you this time” Never have I had such a memorable Christmas Day in life. Thanks so much Kavya for making it so special.

This site uses Akismet to reduce spam. Learn how your comment data is processed.